On the evening of January 13, 2012, the Costa Concordia, which was to make a Mediterranean cruise from Civitavecchia via Savona, Marseille, Barcelona, ​​Palma de Mallorca, Cagliari to Palermo, is shipwrecked off the port of Giglio Island. At 21:45, it collided with a small offshore rock formation called Scogli delle Scole about 500 meters from the port of the island, Giglio Porto. The hull was slashed over almost 70 meters, it hit licked and went down with a slope of 65 degrees a few hours later.

At the time of the accident 3216 passengers and 1013 crew members were on board. The accident causes the death of 32 people as well as 193 injured. In addition, a Spanish diver died during the salvage work in February 2014. The Costa Concordia is the largest passenger ship which has ever sunk.

The close proximity of the ship to the coast was explained by the maneuvering greeting, the so-called "inchino", in which the cruise ships came as close as possible to the coast to greet the inhabitants with the sirens. The commander of the Costa Concordia, Francesco Schettino, was later charged and in May 2017, the Court of Appeal upheld his sixteen-year sentence to prison.

Spot of the desaster 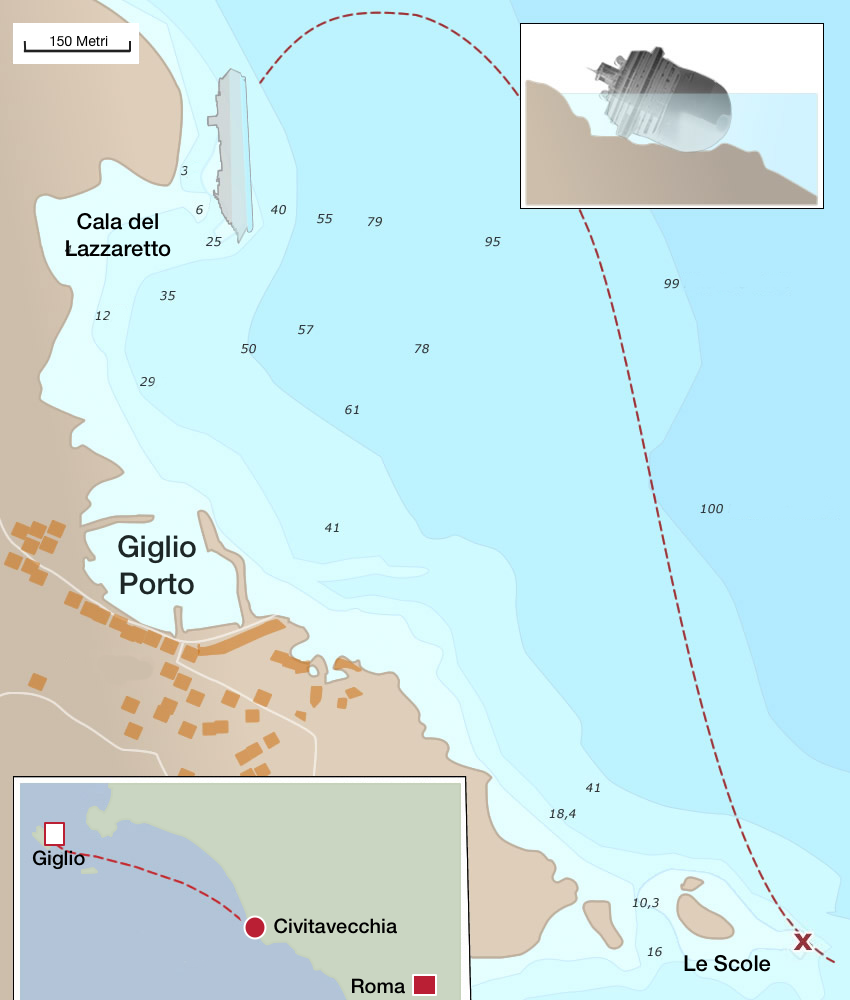 Passage of the Costa Concrodia in front o fthe bay of Arenella after a "inchino" at Giglio Porto (July 10th, 2008)

The "famous" phone call between the commander of the Costa Concordia, Schettino, and the Port Authority of Livorno

Salvage of the Costa Concordia

At the beginning of February 2012 works began on salvaging the Costa Concordia. After the removal of floating and bulky objects, as well as the extraction of sewage and fuel, in May 2012 work began on securing and recovering the wreck in 5 phases:

On 23 July 2014, the Costa Concordia leaves the waters of the island of Giglio after 922 days and begins its final journey to Genoa for scrapping. The distance of about 190 miles was covered with an average speed of 2 knots (4 km / h). About 4 days later, on 27 July, the wreck arrived in the port of Voltri in the Gulf of Genoa, where it is being dismantled. A disassembly period of 2 years with over 1000 employees is estimated.

Complete removal of the platform and cleansing of the seabed is expected to take until 2017.

The shipping company Costa Crociere estimates the cost of salvage at around 1.5 billion euros, most of which will be assumed by the insurance.

The wreck of the Costa Concordia - February 2012

The Rotation of the Costa Concordia - September 2013

Re-Floating of the Costa Concordia - July 2014

With a length of 290 meters, a height of 52 meters, and 1500 cabins with a total capacity of 3,700 passengers, the Costa Concordia was the largest cruise ship of the Italian Navy.

Built by Fincantieri in Genoa, the Costa Concordia was commissioned in July 2006.

On board there were all sorts of comforts, including 58 suites with balconies, 5 restaurants, 13 bars, 5 whirlpools and 4 swimming pools, including two with movable glass roofs.

A true "floating temple of the sea", as defined by the Costa Crociera on its website, with almost 2000 square meters divided into two bridges of sport and well-being. Concerning leisure activities, the Costa Concordia offered a theater on three floors, the Athens Theater, a driving simulator with great price, video games, a disco, dance halls and casinos.