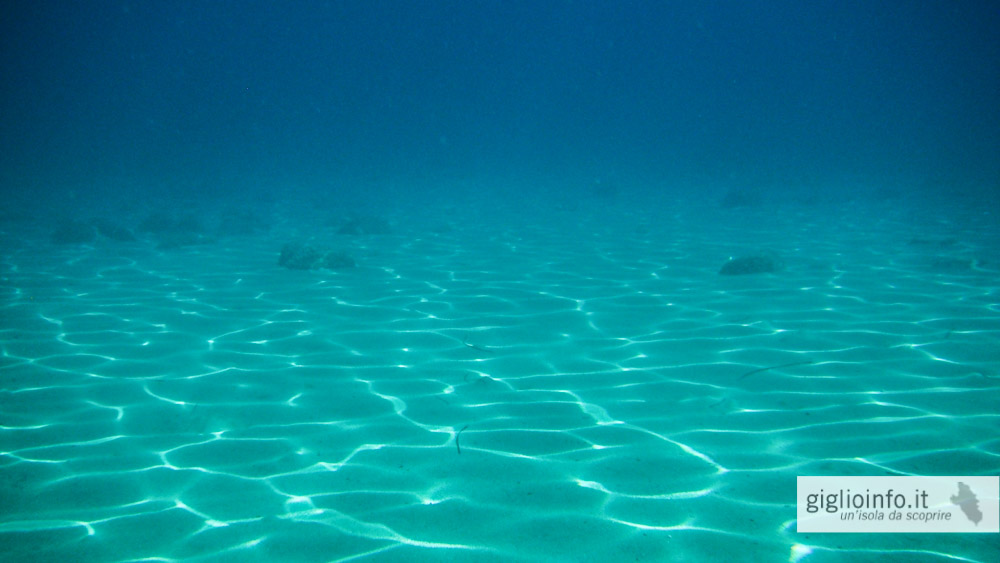 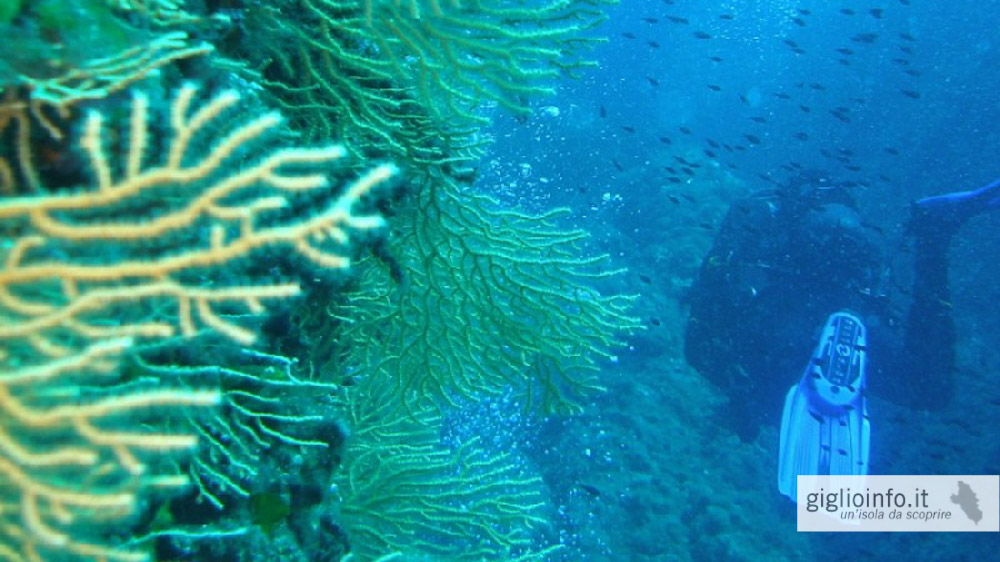 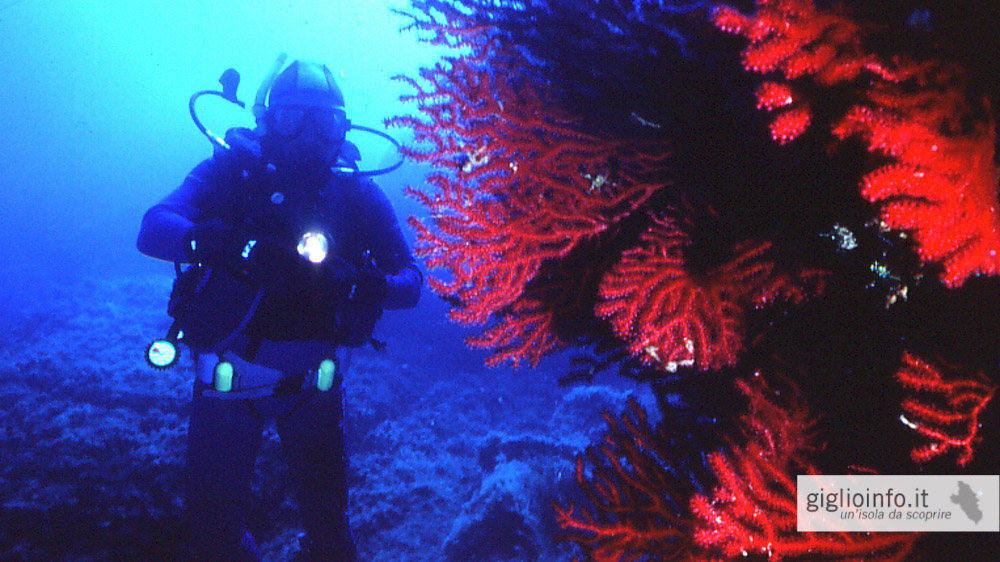 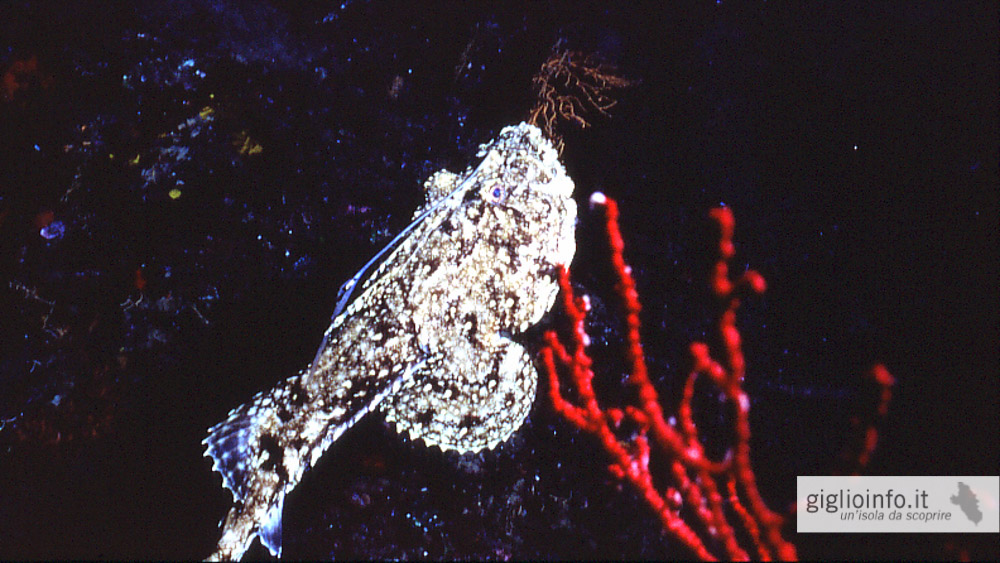 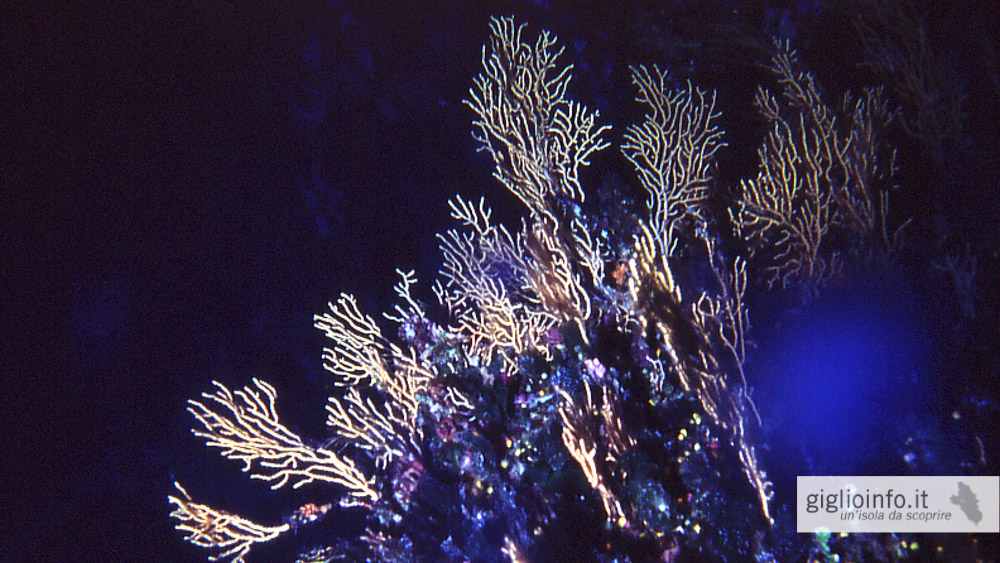 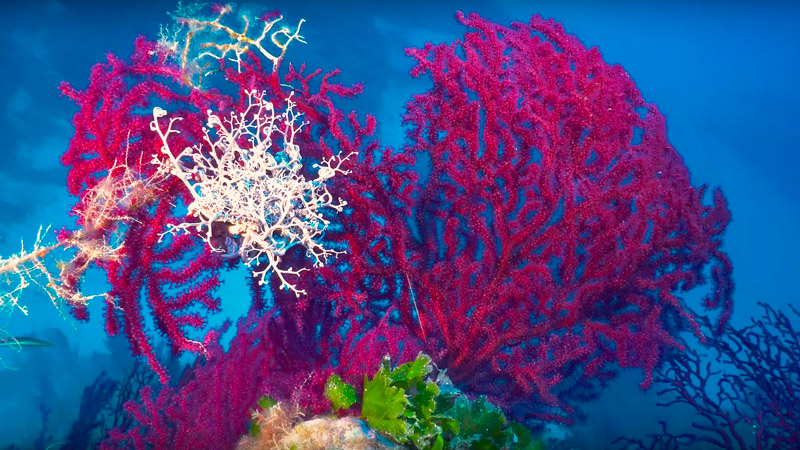 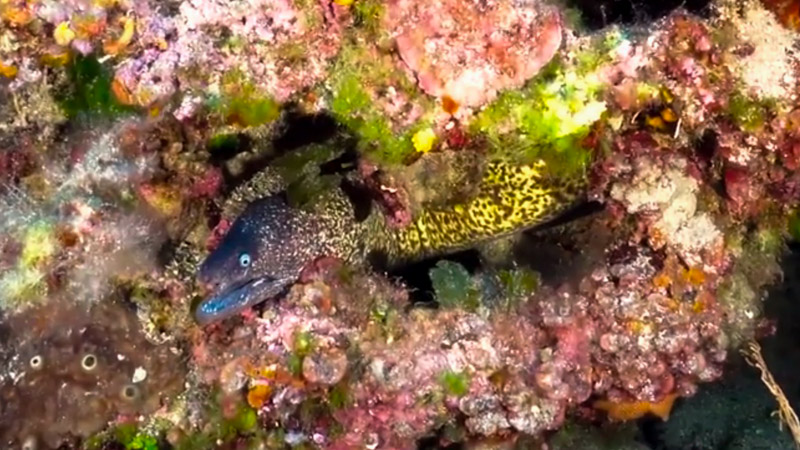 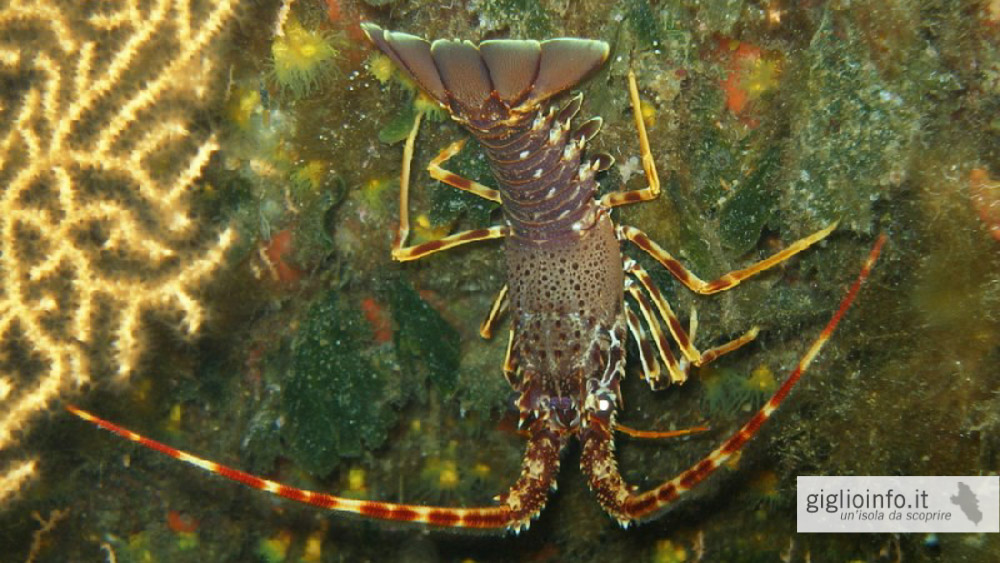 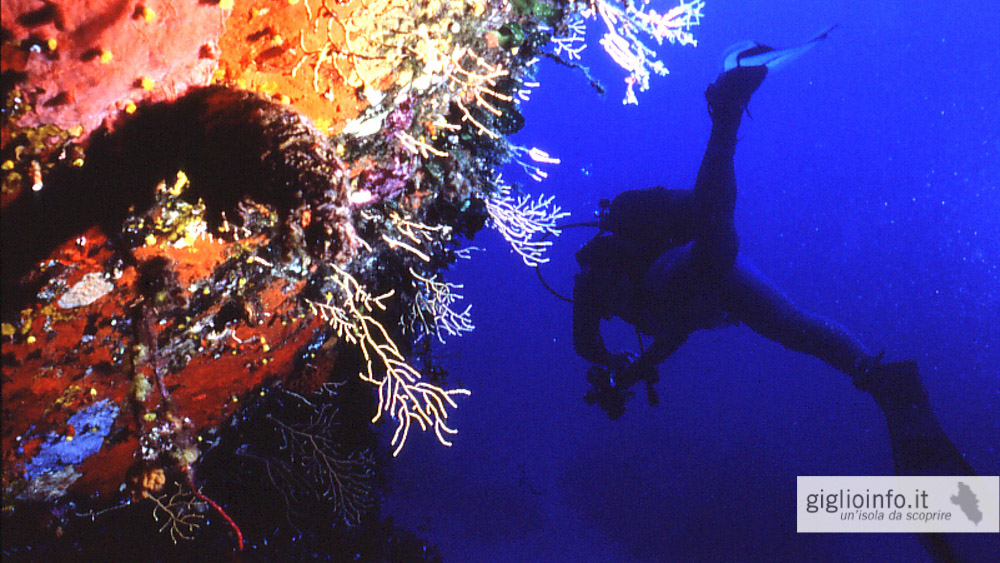 The underwater world of the island Giglio

The Giglio Island, with its never too cold, crystal clear waters and its many caves and ancient wrecks, makes it one of the best scuba diving spots in Italy.

The breathtaking underwater world has a great diversity of species: one often encounters lunar or tuna swarms (especially in spring by the influence of the currents). You will find octopus, conga, barracudas, toothed bream, moray eels, monk fish, giant spider crabs (with a body diameter of more than 30 cm) and crawfish. With a little luck you can also see seahorses. The rock walls are covered by red Gorogon forests that grow from a depth of over 25m. You can also find yellow crust polyp or black coral. 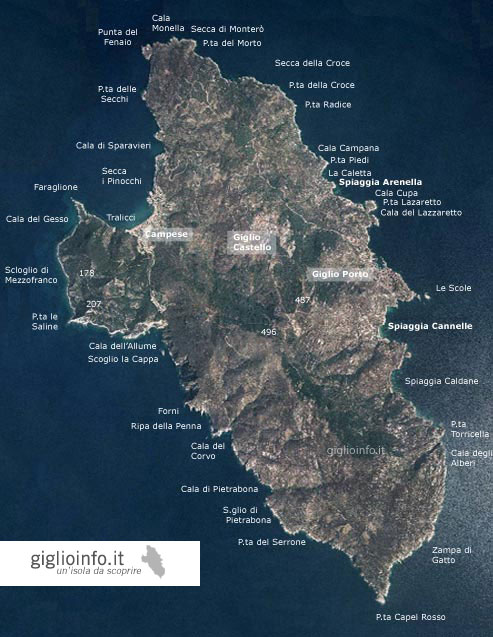 with names of the coves

Dive at the southern tip of the island, the Punta del Capel Rosso

Dive at the Scole where the Costa Concordia striped the rocks 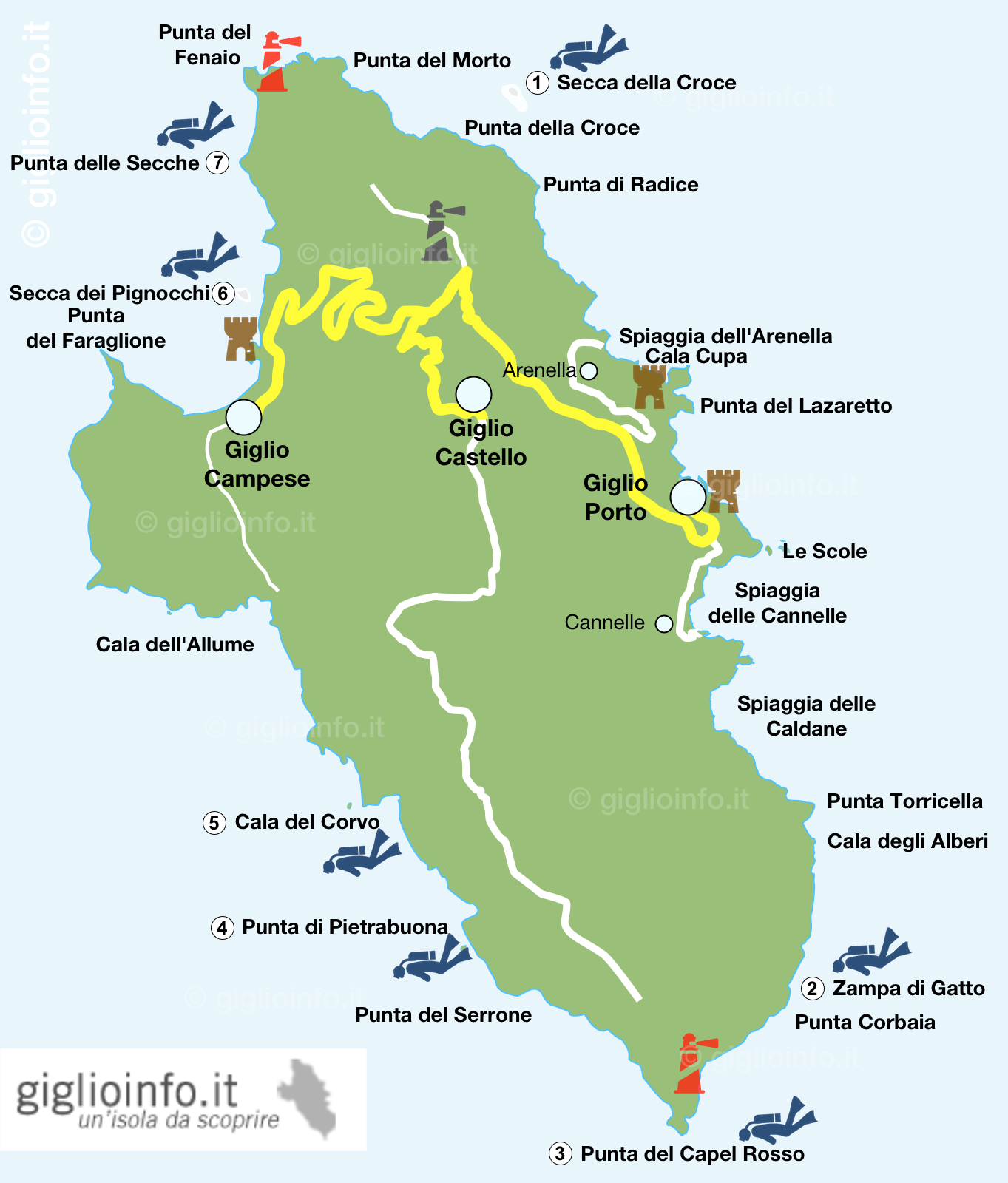 Some of the most beautiful diving sites on Giglio Island

Northeast of the island, several hundred meters from the coast, lies the shallow Secca della Croce (Secca IV), one of the most beautiful dive sites of Giglio. Coming from Giglio Porto, after the Punta della Campana, look out for a large rock with a deep, cross-shaped cut. From there, make for deep water for a couple of hundred meters.

It is a plateau-shaped rock formation, which towers up to 12 m depth. The side facing the sea drops steeply to about 50 meters and then turns into sand. The island facing side falls gently with large boulders. You will find beautiful overgrown rock faces, caves with covine and bream, while in the blue water dart bream and ricciole.

Due to its location on the open sea with shipping traffic and sometimes strong currents, this dive site should only be visited with a local guide. Map ⬆

The Secca Zampo di Gatto is located on the southeast side of the island of Giglio near the Punta Corbaia. Underwater you will find a rocky ridge that runs from the Punta Torricella parallel to the coast and is separated from this by a valley of sand.

From a small outstanding boulder, we dive down to the shallow, which is about 27 meters deep. It is covered with beautiful gorgonians and sponges. On the side to the open sea one dives to approximately 50 meters depth and in the rock formations you can find lobsters, scorpion fishs and large moray eels. Map ⬆

To explore the two sides of the southern tip of the Giglio island you will need more than a single dive. The western side is less spectacular while there is on the eastern side one of the island's largest field of color changing gorgonians (aramuricea clavata).

As soon as we have anchored the boat in a small bay under the lighthouse, we dive down to the bottom of the sea at a depth of about 15-20 meters. Swimming out to sea there are big boulders at a depth of about 20 meters, where the first corals are already visible. As you dive deeper, the rocks are overgrown with more and larger gorgonians that glow red in the flashlight.

Especially at the beginning of summer and autumn you can meet swarms of pelmids (marine fish from the family of mackerel and tuna) or amberjacks, which pop up suddenly to disappear again in the blue of the sea. Map ⬆

In front of the Cala di Pietrabona rises the rock of the same name, the shape of which reminds of an elephant. The cliffs drop steeply down to 50 meters and are dotted with yellow gorgonians, tunicates and sabella spallanzanii. The crevices and grottoes, whereas, provide a safe haven for lobsters and sedentary fish. Sometimes the very beautiful specimens of sunfish can be seen. Map ⬆

On the west coast, near the cove Cala del Corvo, this dive site is located directly on the small rock of the same name that protrudes from the water. The rocks fall steeply down and are covered with corals and sponges. The crevices are home to scorpionfishs, moray eels and crayfishs. At a depth of about 35 meters there are literally groves of small gorgonians and orange candlestick sponges. On the side facing the open sea one can often experience the passage of pelamics, amberjacks or dentex, in the spring months also of large sunfishs (Mola mola).

Even so the current is quite strong, the dive is also suitable for less experienced divers who can experience one of the most beautiful underwater worlds Giglio's without having to dive to deep. Map ⬆

In the bay of Campese, just a few meters from the coast (in front of the campsite), lies the Secca Pignocchi (Secca I). It is a large rock (about 25 x 50 meters), which extends in NW-SO direction. It rises up to 2 meters below the water surface and drops rapidly to 40 meters, where it turns into sandy ground, which slowly descends into the depths.

On the rock you can admire a colorful coral sea, while in the greater depths hide moray eels, dark hake and conger conger between the rocks. Map ⬆

The dive site Punta delle Secche is located at the north-eastern end of the bay of Campese, about 150 meters from the coast and is very similar to the shallow Secca dei Pignocchi.

It is a large, but much more rugged rock (about 35 x 100 meters), which expands in a north-south direction and rises at its highest point to 1.5 meters below the water surface. On the coastal side, the rock passes over to Posidonia meadows at a depth of around 15 meters. On the western side, towards the open sea, the rock drops to 65 meters. This side is much more interesting: at 30-40 meters depth, the rock is colonized with gorgonians, swans, tunicates and anemones like the Alicia mirabilis. Especially during a night dive, you can surprise the elegant white-spotted octopus, a red octopus with white spots, or see moray eels, cuttlefishs or spider crabs. Map ⬆